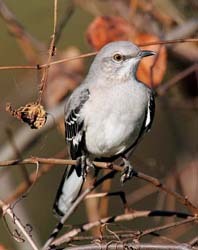 Two of the more common mimic thrushes in North America are the Northern Mockingbird and the Gray Catbird. Mockingbirds are often known for their high-perched nocturnal serenades while catbirds are known for their cat-like mewing from a thicket. Both may be found in neighborhoods and enticed to yards.

The Northern Mockingbird is aptly named for its ability to mimic the calls of dozens of other bird species, along with numerous other animal and mechanical sounds. In fact, the mockingbird's Latin name, Mimus polyglottus, means many-tongued mimic.

Northern Mockingbirds have been known to so skillfully imitate sounds such as squeaky gate hinges, sirens and barking dogs that even an acoustical analysis could not tell the difference between the mockingbird and the original sound. Mockingbirds often have a repertoire of more than 200 different songs and continue to add new songs to their collection throughout their life. During their long nocturnal serenades, Northern Mockingbirds are capable of singing more than 1,000 songs per hour.

A Northern Mockingbird's diet consists of about equal amounts of fruits (wild and cultivated varieties including grapes, apples, barberries, hawthorn, elderberries and rose hips) and arthropods (spiders and insects such as butterflies, beetles, ants, bees, wasps and grasshoppers). Northern Mockingbirds will visit feeding stations that feature suet and Bark Butter feeders as well as tray and platform feeders with fruit and mealworms.

Gray Catbirds are also great mimics and known to imitate dozens of other birds, tree frogs and mechanical sounds. They often sing in ten minute intervals, delivering about 90 syllables per minute.

Often heard before they are seen, listen for catbirds' cat-like mewing call or their syllabic song from bushes and thickets. They quickly hide in thick cover when approached, but they're very inquisitive and can sometimes be called back out with a "pishing" sound or a sound like kissing the back of your hand.

Gray Catbirds love water and could be enticed to visit moving water features in your yard. Catbirds eat insects and fruits like berries and grapes. Attract them to your tray or platform feeders with mealworms, raisins and plump currents that have been soaked in water. Catbirds also enjoy easily-accessible Bark Butter spread low on a tree trunk or on a Bark Butter feeder.